Behind the Scenes Video: Ansel Elgort with Teen Vogue

Ansel recently had a photoshoot with Teen Vogue for their April issue! Here's a behind the scenes video they shared, and the photos are below, along with their intro to the video! 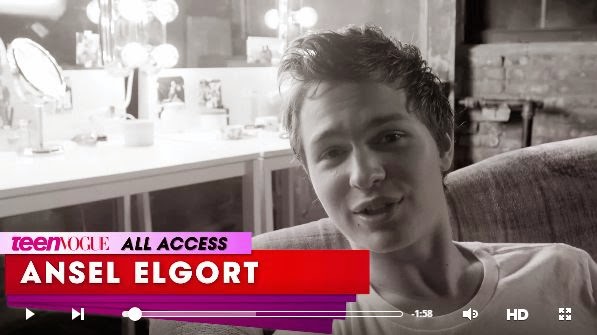 "Going behind-the-scenes with Ansel Elgort is never a bad thing—especially when there's dancing involved. When we spent some quality time with the Insurgent star in Brooklyn during his Teen Vogue photo shoot, he was totally in his element.

Ansel went back to his roots for the dance and theater-inspired shoot. From the backstage dressing room vibes to a gorgeous model accompanying him en pointe, his time in the studio definitely brought back some memories. But that wasn't the only magic that happened throughout the day.

Ansel's mom brought a very special guest by the shoot—Katie Hawley, who's battling Ganglioneuroblastoma, a type of nodular cancer. As a big The Fault in Our Stars fan (and Ansel fan in general!), it made her day to be able to meet her favorite star—and completely inspired Ansel in return.

The main thing we took away from this video? Ansel's still the same sweet, thoughtful guy we've always known him to be. Despite being one of the most-talked-about movie stars in the biz, he's happy to say he's still as normal as can be. As in a Chipotle-loving, street ball-playing guy who loves nothing more than lying in bed relaxing for hours on end. Watch the video above and see for yourself!" @anselelgort is the best date ever! We went out with Hollywood's king of hearts—head to TeenVogue.com to hear all about the strange sides of fame and what love means to Ansel. Photos by @giampaolosgura.
A video posted by Teen Vogue (@teenvogue) on Mar 13, 2015 at 7:23am PDT