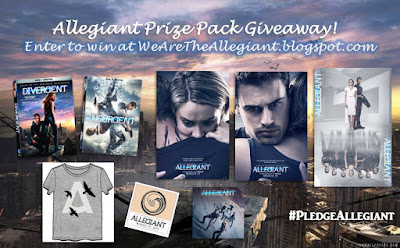 Enter the raffle below for a chance to win the following amazing #PledgeAllegiant Prize Pack:

Update: I have fixed the giveaway! To apologize for the mistake, I have added a second prize that is for my international followers! 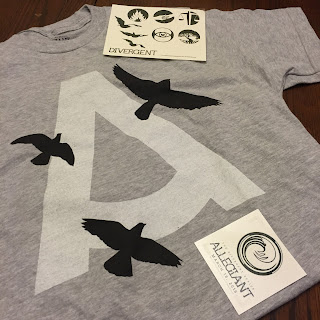 Note: The main prize in this giveaway is in partnership with Lionsgate, and is open to residents of the United States only. Sorry!!! The second place prize is available to all countries!!

a Rafflecopter giveaway
Posted by Jaime B at 6:24 PM 2 comments:

I'll be honest... I haven't watched any of the trailers or commercials for Allegiant. Literally none of them. But I have watched these clips, and I can tell you that they get my excitement level back up. I really wasn't happy with what I was seeing back in November so I just needed a break from it all (also work has been crazy lately, but that's real life). But now I'm back, and these clips have renewed my hope. They're nowhere near as dramatized as the trailers and commercials are. The most recent clip features an interaction between Evelyn and Johanna and it piques my interest to no end. Now I'm excited to see more.

September 15th is an excellent day for the Divergent fandom! (And it's my wedding anniversary, so that makes it extra special for me.) Today we got our first actual footage from Allegiant, as well as two behind the scenes interviews!! (Watch them here and here.)

Check out the first official teaser trailer below and enjoy!!

ET went behind the scenes of Allegiant for us and shared this awesome footage! I'll get screenshots up soon.

Exciting day, Initiates!! It was announced this morning by the official twitter account for Divergent production in the UK that we'll get our first teaser trailer tonight! And then MTV goes and releases this first look footage! So. Exciting!!

Thanks a ton to TheTheologians.net for finding this so quickly this morning!

Email ThisBlogThis!Share to TwitterShare to FacebookShare to Pinterest
Labels: Allegiant, Allegiant Promo, Ansel Elgort, Miles Teller, Shailene Woodley, Video Interview
Older Posts Home
Subscribe to: Posts (Atom)
Welcome to this blog We Are the Allegiant!
We aim to keep you updated on everything Divergent!