Ansel is on the cover of the April issue of Seventeen Magazine!

He actually has two covers!

Here's the teaser for the interview from Seventeen Magazine's website:

The egg-throwing scene in The Fault in Our Stars is one of the most memorable moments in a movie that otherwise makes you cry your face off. Turns out, star Ansel Elgort had some real-life practice (eggsperience?), he reveals exclusively in the April issue of Seventeen.

Sounds like Ansel was a bit of a troublemaker back in the day, but the best part of his story is that he was able to sweet talk his way out of it, just like the endlessly charming Augustus.

"[My friend] Jordan and I used to throw eggs off my roof and hit cars. We got in trouble with the police when I was 15. They came to our door. I told my dad, 'We were throwing eggs off the roof and you were out of town and they got really mad at us and said if we did it again we would get in trouble, but we're never going to do it again.' I said it all in one sentence. He was like, 'Okay.'"

Here are a few quotes from this interview that E! shared here:

"If a woman is really pretty, it's kind of hard. I'm not going to lie. Actually, that's not true," Elgort said. "Me and Shailene have a really platonic relationship. I've never once wanted her sexually, which is nice. But for me, if a person is someone I'm attracted to, and she's my best friend, hopefully we're dating."

"I like to buy girls shoes and jewelry," the 22-year-old actor said proudly. "I buy stupidly expensive shoes. I got Louboutins for my mom and my girlfriend before. My mom was like, 'I can't wear these; they're too high.' I was like, 'Mom, you have to try them—they're so cool. They're red snakeskin!' She still wears them every so often, but she can't walk in them."

"I like romantic dates—going on a long walk in Central Park and then taking the subway downtown and going out to eat and ordering oysters. After that, you walk around again and talk. Morning dates are nice, too. I love doing romantic s--t. It's fun," Elgort told Seventeen, on newsstands March 24. "It's like you're living in a movie." 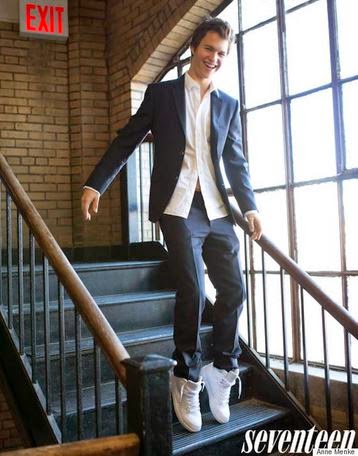